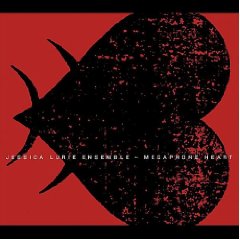 It’s not easy for a musician to nurture their sound into something quite unclassifiable, yet still remain strongly tethered to a particular genre.  Jessica Lurie makes it look easy.

This is jazz music, though put it side by side to an album recognized universally as jazz, and it’s like night and day.  It’s a matter of apples and origins.

There’s folk music here.  There’s quantifiable amounts of Klezmer.  The vocals could belong to an Indie-rock song.  There are excursions into Greek traditional folk dance.  And, yes, there’s jazz, too.  But where many artists begin with jazz and move outward toward the fringes while incorporating other influences, Lurie seems to move in a different direction… bringing her disparate elements together in a way that suits her, and which just so happens to coalesce into jazz.

It makes for an alluring and potent mix of music.  For this album, she brings together a stellar lineup.

Aside from it being a heavy talent pool, Lurie’s choice of personnel was pretty crafty.  All the musicians on the album are quite adept at playing outside traditional jazz lines.  Brandon Seabrook fit in seamlessly with Jeremy Udden’s folk-jazz music.  Erik Deutsch plays funk/rock/jazz keys under his own name, as well as on bluegrass-jazz outfit County Road X and as sideman for Country act Shooter Jennings.  Todd Sickafoose recorded a brilliant indie rock-jazz album Tiny Resistors, and is a long-time sideman for pop musician Ani DiFranco.  Allison Miller is full-on modern jazz, and ably handles all the genre crosscurrents that exemplify it.  They all have proven capable of adapting to the music in front of them.  That’s a good quality to have when Jessica Lurie is leading the charge.

In doubt of what’s in front of you, stare right at the heart of the album.  In this instance, the album’s heart is “Der Nister.” It touches on so many of the themes and sounds glimpsed at throughout the album.

Lurie is growing more assured as a vocalist.  On previous albums, she displayed an adeptness at the turn of phrase, but on tracks like “Maps”, there is a richness to her emotive shifts in tone that smooths out the edges even as the words cut into the hearts of anyone listening.  Closing track “Once” is yet more evidence of her adeptness at vocal gymnastics and how no degree of difficulty is too risky if the song demands it.

Seabrook has always wielded the strings like a rusty blade… a sharp precision that displays its wear and tear on its sleeve.  And this doesn’t change whether it’s guitar or banjo.  There is nothing pretty about his sound, and, strangely, that makes it all the more rapturous.

Allison Miller is easy to notice on drums.  She has a distinctive sound, one that compels the rhythm though she’s never outwardly aggressive.  Miller has a way of getting the rhythm to obey without ever raising her voice or making a fist.  It was no different on her own solid 2010 release Boom Tic Boom.

The guest appearance of strings is a nice touch.  On “Zasto,” Hughes’ cello, Swafford’s violin, and Sickafoose’s bass conjure up some serious magic.

I’ve been a fan of Lurie’s music for years now, so when I say I’m addicted to this album like none previous by her, it’s important to recognize that she had already established a pretty high bar to surpass.  Megaphone Heart does just that, and I’m absolutely sure it will be on my Best of 2012 when I make my half-way point of the year post in July.

You can stream the entire album, and purchase it, on her Bandcamp site.

The album is Self-Produced.  Jazz from NYC.