It’s been a little while since I put up some Tiny Reviews, and today is as good a day as any, so let’s jump right into it.  Today we’ve got three albums that come nowhere close to straight-ahead and one piano trio album as a palate cleanser.  The Clausen album has a shot at making my best-of mid-year list, due out sometime in July. 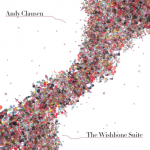 Brilliant debut album by trombonist Andy Clausen,who finds a way to fuse a disparate line-up of musicians and their seemingly ill-fitting instruments into an alluring, whimsical, and just-plain-cool mix of jazz, classical, and experimental music. Clausen often paints harmonically with broad brush strokes, which highlights the joyful details of his meticulous treatment of simple melodies.  Challenging music that doesn’t shy away from also being pretty.

There isn’t much out there that sounds like this music. Matt Ulery‘s blend of jazz, classical, and lullaby seems like the closest thing I can offer by way of comparison. Just really compelling stuff which earns more of my esteem with each subsequent listen.

Released by the Table & Chairs label.  Clausen is a Seattle native currently attending Julliard in NYC, and I don’t think he’s the only one in the ensemble with that situation.  So, this is jazz from a couple music scenes.

You can stream the album on the label’s bandcamp page. 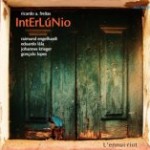 Interesting quintet date that has plenty of avant-garde flavors to go along with a strong world jazz sound.  Ensemble via Portugal, but the ensemble members trace their individual studies to Mediterranean, Arabic, Flamenco, Renaissance, to name a few, and which inform the album music to varying degrees.  Interestingly enough, rather than try to give a healthy taste of their various music endeavors, the Interlunio ensemble utilizes an economy of sound… much to the recording’s benefit.  End result is something that sits in the same chamber jazz territory of, say, Wayne Horvitz’s Gravitas Quartet, but with heavy infusions of an ECM New Sound release.  An unusual beauty, unconventional melodies, and a peacefulness even during moments of chaotic interaction.

Released on the JACC Records label.  Jazz from the Lisbon, Portugal scene. 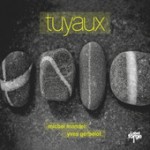 A duet of saxophones and clarinets.  Vacillates between the peaceful end of things and the fiery side of the spectrum.  The pulse of a beating heart, the call of wild birds, the whisper of a cool breeze darting between the countryside trees, moonlight spreading out over a calm ocean surface… an album full of imagery.  And it’s always nice when a clarinet gets some time in the spotlight to really stretch out and remind everyone what a sublime sound it’s capable of achieving.

You can stream an album track on the label site, here.

Chris Plansker Trio – Inside the Bubble

Nice little piano trio date.  Nothing complicated, laid back with a vibrant sound, definitely with at least one foot in the modern jazz composition setting, but nothing that makes it inaccessible to classic jazz fans.  Focus on ambiance.  Quite pretty at times.

That’s it for today’s article.  Looks to be about two more sets of Tiny Reviews from this batch of new arrivals.

Here’s some language to protect eMusic’s rights as the one to hire me originally to scour through the jazz new arrivals and write about the ones I like:

My thanks to eMusic for the freelance writing gig, the opportunity to use it in this blog, and the editorial freedom to help spread the word about cool new jazz being recorded today.