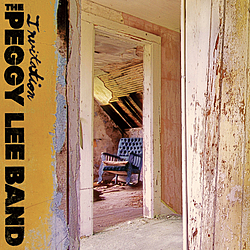 Cellist Peggy Lee has been steadily creating some of the more intriguing music on the scene.  Each album brings an enchanting mix of avant-garde jazz and modern folk and classical musics.  This is music that triggers brain synapses while also sounding pretty.  Guitar chirps and wide brush strokes of horns, strings sighing and shrieking, echoes of nightmare visions gradually yielding to bright sunlight, creating a tableau of hot and cold, pastoral and scarred.  The dichotomy of this clash of opposites is the quality of Peggy Lee’s music that makes it so damn compelling.  It forces the brain to actively sort through competing sounds that suddenly come together, a phoenix-like beauty of warm notes rising from dissonant ashes which engages the heart with the simple, majestic wave of beautiful music.

This is music that dares to be something great.

Compared to past albums, there is a streamlined quality to Invitation.  On previous recordings, most notably 2008’s New Code, the flow from one track to the next had a blunter edge, and the dividing lines between creative thoughts were painted with thicker brush strokes.  On Invitation, the polish of the transitions blurs the lines between songs, while maintaining the edgy quality of those moments where Lee stakes out a crooked path for her ensemble.  Lee’s compositions have lost none of their combustible nature, and it’s as difficult as ever to predict whether it safe to lower your guard down, but if this album is a diamond, then it’s more likely to be appreciated for its shine than its sharpness.

Invitation begins with a celebratory tune, one that wavers with enthusiasm and glows with good cheer.  Trumpet and sax take turns singing gleefully atop luscious harmonies and the welcoming chatter of percussion.  It’s the album’s title-track, and it is truly inviting.

Second track “Why Are You Yelling?” changes face several times over.  What begins as an extended avant-garde attack on strings suddenly jolts into a rollicking jig.  This, in turn, shifts into a post-rock meander and stroll.  A trumpet solo bisects the tune into yet two more halves, and while the motifs of the first half are touched upon in the latter half, they are refracted through the view of Berkman’s trombone ferocity and Wilson’s guitar whispering.

Third track “Your Grace” begins with the skittering of strings, and blooms into a gently rocking ballad of exquisite languor and subdued nobility.  It’s a song that offers profound moments in a hushed voice.

“Chorale” begins with scattered percussion stumbling in the dark before sunlight seeps in through the blinds.  Strings and woodwinds gently wash over the dwindling percussion.  And this leads so sweetly into “Path of a Smile,” a luxuriant mix of strings that vacillate between lullaby cooing and urgent nudges.  Turner’s restrained but powerful trumpet solo punctuates the tune’s uplifting grace.  Lachance’s refreshingly lyrical bass solo leads back to the string section and their heavenly statement of melody.

The swerving, frenetic sound of strings of “Not So Far” follows a sonic moment I just finished describing as “heavenly.”  Lee brings them together as if they were a natural pairing, and then reinforces the bond stronger by returning to previous ground with the easy sway of sax and trumpet.  It creates a cycle of cohesion withing a greater circle, without sacrificing the sense of linearity.

“Little Pieces” takes a similar path to that of second track “Why Are You Yelling?”  It begins with a folk jazz blend reminiscent of Jeremy Udden or Jenny Scheinman… lovely string sections buffeted by soaring brass and woodwinds.  It’s the kind of gentle beauty that might shatter if touched.  This, however, is clearly not something that Lee fears, because she steers the tune into a nifty groove (via a nice turn by Samworth on guitar and a subversively cogent bass line by Lachance).  It’s a shrewd bit of compositional talent by Lee, especially that she ends it with a return to the opening stanza and creating a circle out of a line that appeared without resolve.

“You Will Be Loved Again” begins with single guitar notes sliding over fresh ice that leads into a string and woodwind ballad.

“Punchy” has a bustling energy.  Saxophone calls and trumpet replies are buoyed by strings and jettisoned by percussion.  Interplay between sax and guitar sounds as if they’re viewing each other in the reflection of a mirror… complementary notes have a contradictory nature, and when they meet, it’s not head-on.  An extended section on guitar would be more at home as a rock solo, and based on drums ramshackle attack, van der Schyff appears more than happy to pursue that direction.  The song ends with the same bustling energy and same melodic pronouncement.

“End Waltz” doesn’t present any surprises, either from the song title or the music itself.  It’s a simple tune simply done.  Turner brings some passion to the song with a heated trumpet solo atop some to-and-fro string and sax accompaniment.

“Warming” has many of the attributes of the album’s opening song, though it has more of a pop song banter and where the opening track spoke of possibilities ahead, the album closer is one of finality, looking for, and finding, a satisfactory resting spot.

Peggy Lee has consistently created music that is difficult to categorize, difficult to describe.  Her music has a singular presence that defines itself, and with each subsequent recording, the music reveals itself as part of one long masterstroke.

Released on the Drip Audio label.

Jazz from the Vancouver, Canada scene.