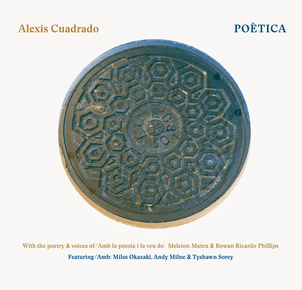 POÈTICA comes at a strange time.  The brilliant new album from bassist Alexis Cuadrado incorporates multilingual spoken word poetry, Flamenco, Latin Jazz and modern straight-ahead jazz to reflect the stories of societal dislocation of immigrants to America.  The imagery conjured up by the music and the tonal changes of the spoken word distill the experience of being a new person in a new town.  The vocal cadences, staggering, occasionally falling back on themselves before resuming their original pace is treading new ground in a new place.  And how they eventually enter the skittering confluence of guitar, piano and drums is the embodiment of that same person beginning to sync up with that new city’s rhythm, of entering its flow, but perhaps still feeling apart.

Nothing encapsulates this potent mix of emotions better than the three-part suite “Balada de Matt Sweeney,” which goes from giddy excitement to raw disillusionment to gritty determination.  It’s always a fight, but never so much as when you’re the visitor receiving push-back on someone else’s home court.  “Here be dragons,” the voice warns on “Mappa Mundi.”  And another voice repeats the nebulous intonation “the eye seeking home has to lower, lower, lower” on “Song of Fulton and Gold.”

This has been a strange year.  Not in the normal things-change personal way, but in how societal events alter the shape of the everyday and nothing looks the same and the perspective becomes that of a collective… one that we may and may not belong to, simultaneously.  For many, this presidential election instigated a jarring sense of dissociation with our surroundings, a cultural dislocation from a society that had meant to house our better angels.

The crushing end to “Song of Fulton and Gold” is Rowan Ricardo Phillips intoning, “There are no towers.”  Its intensity is amped higher by the pragmatism of his earlier advice to not look up.  How many couldn’t look up on November 9th of this year?  How many felt the collective weight of despair, that something had gone terribly wrong?  And despite the overwhelming sense that the end was underway, had to go on with life as if normal.  To step outside, into the sun, unable to look up, feeling like an outsider.  POÈTICA is not a guide to navigate to a better place, nor does it substitute as a source of advice.  But it is a reminder that the feelings of disassociation and separation are not new, not permanent, and the disillusionment that follows the euphoria is, in turn, followed by determination.  POÈTICA came at a good time.

Listen to more of the album at the label’s Bandcamp page.

This Is Jazz Today: Frank Kimbrough, Jacob Duncan, Christophe Dal Sasso, Andre Canniere and Harald Lassen These are videos that I like: Jacob Duncan “The Busker”