Recommended: Lewis Jordan and Music at Large – “this is where i came in” 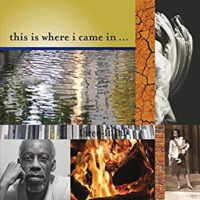 This is old-school music from back when it was new school.  The blues are an ever-present force for expressing joy and pain, but they are rarely conjured up with conventional means or spoken with an ordinary voice.  There are shouts and drawls and sighs.  Sounds are warped and sometimes it feels like the center of this album will not hold.  There is a sense of laughter.  Lewis Jordan‘s wonderful this is where i came in brings together inside-out jazz, spoken word and modern groove.  His Music at Large sextet is comprised half by wind instruments, and the saxophonist layers their wild, unkempt strands of melody into patterns altogether fascinating.  He doesn’t mind when electric guitar burns a path right though it.  The bass and drums duo seems to shape the tempo with a cryptic algorithm based on predictive modeling… except when they’re digging deep into a groove.  The transition between instrumental tracks and those with spoken word is an ebb and flow affecting both lyrical delivery and emotional impact.  They both feed one into the other, amplifying the strengths of one another.  And there isn’t a moment on this album that isn’t fun.

This Self-Produced album is released on Common Notions.

The Round-up: We walk together and dream Recommended: Hans Ludemann’s ROOMS – “Blaue Kreise”