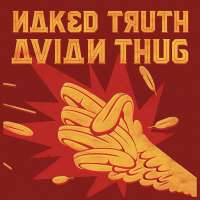 What a crazy collage of sonic imagination this is.  The last recording of the Naked Truth quartet of trumpeter Graham Haynes, guitarist & bassist Lorenzo Feliciati, keyboardist Roy Powell and drummer Pat Mastelotto was not exactly a passive event… huge doses of electronics and effects were a landscape of fire that the musicians either soared high above or fanned the flames of intensity.  We’re talking 1970’s psych-jazz-rock fusion but one more interdimensional than interstellar.  There’s some space jazz action, but Naked Truth works things more at the molecular level.  Their sound isn’t made of stars, but from the soil, and consists of elements not found here on Planet Earth.  Those are the ingredients they work with, but on their newest, Avian Thug, the way they go about shaping these same raw elements into distinguishable forms is more than a little bit different and more than a little bit cool.

Opening track “Rapid Fire” is immediate proof of the change with its curious crosshatch of Jimmy Smith organ trio groove and Beastie Boys staggered cadence.  It’s the stuff of the future openly displaying the seeds of its past.  Title-track “Avian Thug” also digs into a groove, but in this case, it stays close to the ground and utilizes a low center of gravity to build momentum to feed an increasingly obtuse melody.  And the structure the song exhibits adds so blessedly much to the song, especially as the quartet goes about stretching it in every possible direction.

“Lazy Elephant” works an ever-changing permutation of the melody with a series of ascensions and descents.  Of especial interest are the fascinating piano lines swirling about like refracted light captured by the thick mist of electronic effects.  It’s a completely different effect with “Trap Door” and its punches-in-bunches approach to tempo and melody.  On the other hand, “Tense Shaman” gets to the heart of early Naked Truth music, back when Cuong Vu was adding his trumpet to the mix and creating oddly fused constructions of atmospheric melodic incursions and tattooed rhythms.

The album ends with the airy “Moon at Noon,” with its syncopated drone and a melodic fluttering, light as a feather.  It’s a lovely ending to the album.  However, it’s a perfect example of the before-and-after differentiation of previous work when it’s preceded by the glittering dissonance of “Day Two at Bedlam,” a tune that twitters with life while sending out droplets of sound like a melody liquefied into falling rain.  And beneath all of that enchanting pitter-patter is an undercurrent of tension from a rapidly pulsing keyboard and percussion.  It’s one of the best things Naked Truth has ever done, and the way they are able to create something so different from what’s come before without actually deviating very much at all from what’s come before, it goes a long way to showing how this quartet with such a huge sound also possesses the talent to manipulate the details in ways to get them to resonate as strongly as the bolder, louder elements of their music.  It also shows how their music is evolving, finding new ways to frame it even as they experiment with new ways to unleash it.

It’s a dizzying array of sound this quartet creates, but not to get lost in its description is that this is also supremely fun music.

Listen to another album track on the Rare Noise Records Soundcloud page.

You can also purchase the album in a number of different file formats at the Rare Noise store (LINK).