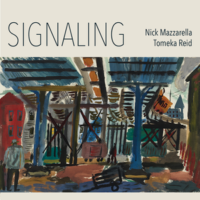 There’s a wearied soul presence to this compelling duet recording from saxophonist Nick Mazzarella and cellist Tomeka Reid.  Perhaps it’s a tone set by the spiritual resonance of “Blues for Julius and Abdul,” but there’s no denying it’s a tonal quality that makes itself felt even within the swirling velocities of “Interstices” and title-track “Signaling,” just as it does during the cathartic wails of “The Ancestors Speak” and the abiding peacefulness of “Like So Many Drops of Water.”  It’s the sound of music speaking from its roots.

The duo’s plan going in was to seek the guidance of 1970s avant-garde expressionism before turning around and rechanneling it with the voice of the new century.  The transition between perspectives old and new is especially effective in how the contemplative “Rediscovery of an Age” increasingly bubbles with excitement before eventually reaching a boil, and how the distance between a murmur and a roar is made to seem infinitesimal on the ephemeral “Topographies.”  But key to the success of Signaling is how these inspirations fall easily into the embrace of those pieces where influence and era are cloaked in subtlety or obscured altogether.  And so, while opening track “Blues for Julius and Abdul” may have set the tone for the recording, the concluding piece “Invoking a Spirit” embodies its spirit.  Both familiar and strange, the music has a universal nature, tied to no decade and yet tied to all, where a heartfelt melodic voicing and a wide open path speak to music past and present.

Music from the Chicago scene.

Recommended: Hans Ludemann’s ROOMS – “Blaue Kreise” The Round-up: The heartbeat of the city is your heartbeat, too