The Round-up: The heartbeat of the city is your heartbeat, too 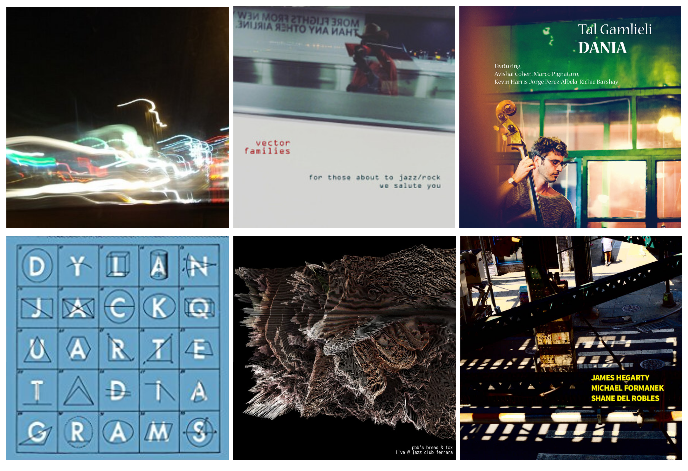 The only thing cliche about this jazz-rock crossover is the album title.  Drummer Dave King, saxophonist Brandon Wozniak, guitarist Dean Granros and bassist Anthony Cox crank out a rich display of jazz-rock expressionism, and their wild abandon shifting between those expressions is a big reason why this album is so damn thrilling.  An insane rendition of Ellington’s “Satin Doll” embodies the heart of the recording, but its spirit resides in the fiery tracks “Dee Dee” and “10000 Year Old Rotary Club,” where the rate of combustion is entirely dependent on how many lit matches the quartet can dish out per beat.  Even opening track “Free Funk,” which introduces itself with a straight-forward groove, ultimately devolves into a furious rhythmic episode.

There’s a moody ambiance to this straight-ahead session from bassist Tal Gamlieli, but it emotes a sunny disposition that keeps things from ever getting gloomy or deeply introspective.  That makes a big difference, because the melodic restraint and rhythmic subtlety might not have resonated quite so strong if the album’s heavy heart didn’t possess a heartbeat that practically dances at times.  Gamlieli is surrounded by a strong cast, with trumpeter Avishai Cohen and pianist Kevin Harris counted among the sextet that contribute to this enjoyable recording.

The music of Diagrams is free and light, like sailboats dancing upon waves along the horizon.  There’s some cheerfulness of the blues and quirky modern jazz inflections that make unconventional turns of phrase sound like old sayings.  Drummer Dylan Jack is joined by guitarist Eric Hofbauer, bassist Anthony Leva and clarinetist Todd Brunel, and they find a seriously enjoyable way of making something a little bit different very easy to embrace.

This is basically a live performance of the solid Piero Bittolo Bon recording Big Hell On Air.  That late-2016 release, with its bold pronouncements of melody and their subsequent deconstruction, was an exciting mishmash of modern jazz expressionism and wild improvisational freedom.  Played live, the Bread & Fox ensemble weight things far heavier to the latter quality, and it’s a big reason the music has got such a huge electrical charge.  That said, when they train their focus on the melody of “Flagstaff,” the music rings with no less intensity.  It’s the same crew joining the saxophonist, with trombonist Filippo Vignato, tubist Glauco Benedetti, pianist Alfonso Santimone and drummer Andrea Grillini.

What I find most appealing about this set from pianist James Hegarty, bassist Michael Formanek and drummer Shane Del Robles is that it sounds in a state of perpetual dispersal, and that any structure the music may possess is constantly unraveling.  But the music isn’t chaotic, per se, more like watching an icicle melt and recognizing there is as much poetry in the splashes below as there is in its evolving shape above.