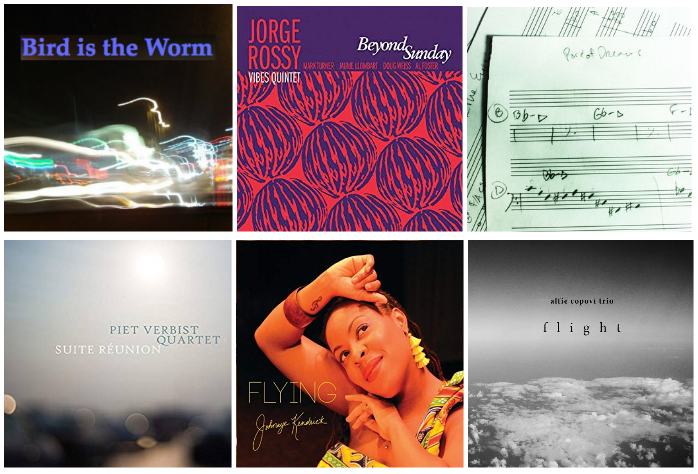 For many, the name Jorge Rossy will be associated with the drums via his long stint in Brad Mehldau’s trio, and so it’ll always be a refreshing change of pace for those times when he leads out on vibraphone.  This modern session with saxophonist Mark Turner, guitarist Jaume Llombart, bassist Doug Weiss and drummer Al Foster has a rhythmic drive at its core, but it’s their melodic compulsions that steer each tune.  In fact, it’s a formula not far removed from Rossy’s FOX trio with Pierre Perchaud and Nicolas Moreaux.  There are some subtly captivating passages on this recording.  Music from Barcelona.

This album has been a refuge for me since it first got on my radar.  This post-jazz recording from E Scott Lindner has a massively cinematic presence, inciting in me imagery so strong that I remain convinced that I must’ve seen it originally on a movie screen.  Incorporating a bevy of wind instruments and strings go a long way to explaining the rich textures and soothing harmonies Port of Dreams has to deliver.  Of those contributions, familiar names like Tomoko Omura, Hailey Niswanger, Sara Schoenbeck and Andrew Gould are among the album personnel.  There are moments this album is so beautiful that I feel like my heart can’t take it all in and remain in one piece.  Music from NYC.

Piet Verbist is far more off the radar than he should be.  The bassist has a real talent for creating modern works that balance expertly between new- and old-school forms of expression.  The axis of this meeting point is where deeply melodic forays and from-the-heart blues occupy the same space, unconflicted.  His latest is yet another example, and well worth scooping up.  Note that Bram Weijters is the pianist in Verbist’s quintet; Weijters is a site favorite, and is on a whole bunch of new releases right now.  Music from Antwerp, Belgium.

Johnaye Kendrick first hit my radar via her captivating vocal contribution to John Ellis’s 2014 release, MOBRO.  Her sound is one that generates a huge feel out of a seemingly effortless delivery, and it’s a quality that she puts to excellent use on her sophomore release, Flying.  While Kendrick certainly knows what to do with a ballad, it’s an upbeat track like “Scorpion” that really allows her innate tunefulness to shine bright.  Pianist Dawn Clement, bassist Chris Symer and drummer D’Vonne Lewis keep to a straight-ahead sound that’s a perfect fit for this session’s choice of originals and renditions.  Music from Seattle, WA.

I’m really taken with this modern trio session from the Alfie Copoví Trio.  They craft a pretty melody, nothing fussy, and then let it sail for as long as the breezy rhythm will take it.  Sometimes it’s hints of gospel, sometimes hints of the blues, sometimes the music hops, but mostly this music grooves.  Music from Valencia, Spain.

There are moments on Flock so pretty, it’s heartbreaking.  Guitarist Ruben Machtelinckx constructs languid melodies and juxtaposes them with insistent tempos, hinting at a potential intensity.  It results in an uneasy serenity that is an immersive experience, but one that could be shattered with just the slightest touch of dissonance.

Key to this sensation begins with the way in which Joachim Badenhorst paints the loveliest passages against this backdrop on reed instruments.  His lyricism is consistent, and to great effect on bass clarinet.  The melody of title-track “Flock” isn’t played, it’s poured.  This continues with “Peterson,” but with the foot pressed just slightly on the gas pedal.  Badenhorst’s bass clarinet sings with a presence, sighs with an arresting redolence.

Machtelinckx and Hilmar Jensson team up on guitars for this session.  The dynamic mix of electric and acoustic guitars, baritone guitar and banjo provides them the tools to play with tone and tempo, while also accentuating the melody in ways that up the level of beauty.  “Cumulus” flashes some teeth and shows some bite with a dissonant outro.  “McMurdo” weaves bursts of electric guitar heat into a melodic cascade from banjo.

On a track like “The Hunter,” bassist Nathan Wouters illustrates his talent for layering shadows across the moonlit path of Badenhorst’s melodic expressions.  On “Loos,” Wouters’s shadows impose themselves upon the fading light of electric guitar.

An album of a mesmerizing beauty.

Jazz from the Antwerp, Belgium scene.

Or purchase the CD or Vinyl direct from the artist.

The NYOP Review Series highlights albums set to Name Your Own Price by the artists with the goal of making price no obstacle to discovering their music.

Bram Weijters – Trio Plus Strings (and a Clarinet) 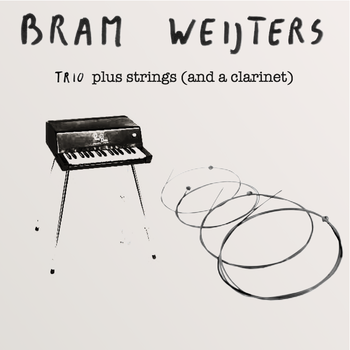 Pianist Bram Weijters has five albums set at NYOP on his Bandcamp page.  All of them resulted from recorded live performances or rehearsals with bandmates that were never intended to get set down on a proper recording.  They have different line-ups, different album lengths, and different sounds.  After rediscovering them years after initially recorded, he decided to put them up on his bandcamp site and leave it open to the customer to pay what they see fit. Meanwhile, his excellent studio recording Imaginary Sketches with Chad McCullough, which I mention on BitW as one of the top albums of 2011, is set at a standard retail rate.  That’s a smart approach, offering some solid music for whatever the customer wants to pay for it, while the recording in which the real investment was made, that goes a more traditional pricing route.

In any event, I chose his album Trio Plus Strings (and a Clarinet) as the one to put in the spotlight.  I’ve been listening to it for well over a year, and it’s no less magical to me now than it was then.  Maybe even more.

There’s three tracks on this EP.  The first, “What Did I Say?”, opens with strings that, eventually, give way to a piano trio format that hops along on a happy jaunt.  The intensity picks up as drums set off some fireworks.  Strings rejoin at the end to help send the tune off to its conclusion.  Second track “Jaja” is a nifty jig, beginning with piano and strings trading notes that give the tempo a bounce and slide repetition. When clarinet enters, it brings the two elements together, while weaving a path that crosses over both.  Bass and drums each stand up to speak briefly before the song ends as it began.

The tune “What’s Wrong?” ends the album.  The contrast between statuesque piano lines and trembling strings are powerful interludes that Weijters returns to over and over.  The transitions to sections of wild bass sprints and piano notes twisting wildly in the wind as drums rain down over it all are even more dramatic when the strings return, still quivering, sounding vulnerable as an unblemished field of white snow.  The song takes its first steps toward the conclusion with a steady march that builds intensity through tempo, the clarinet the only instrument daring to break formation. Strings then enter, and guide the song to set over the horizon.

It’s only fourteen minutes in length, but the album sets down a whole lot of beautiful moments in the short time it has.

Released in March 2009, the album is Self-Produced.  Recorded in Banff at a workshop, so the artists involved hail from all over the planet.  Weijters is a part of the Antwerp, Belgium scene.

You can access all of Weijters’ NYOP albums on his Bandcamp page, both to listen to full albums and purchase if you wish.  His collaborative album with Chad McCullough “Imaginary Sketches” is also available on the Bandcamp page.

NOTE:  I just noticed that Weijters titled the album “Trio Plus Strings” but has the meta-tag of “Trio With Strings” on the Bandcamp page.  It’s no real obstacle, but thought it worth mentioning for future search terms, etc.

You can read more about the Bird is the Worm NYOP Review Series HERE.