The Round-up: This is how it looks when we say goodbye 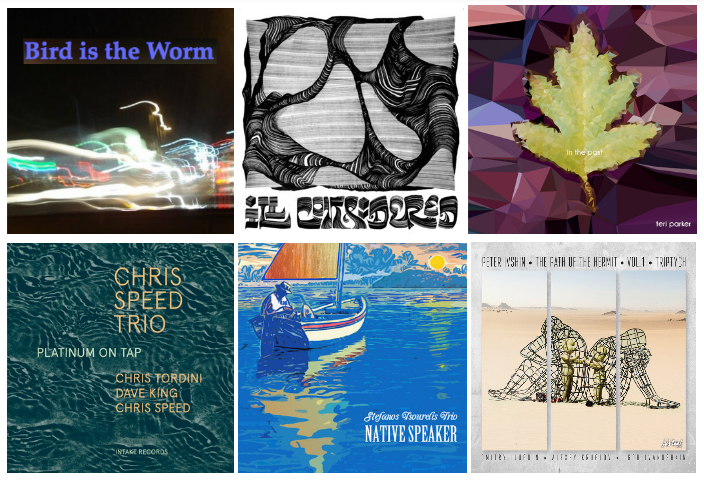 This album is what happens when rocket fuel is distilled into sound.  The Ill Considered quartet of saxophonist Idris Rahman, bassist Leon Brichard, percussionist Yahael Camara-Onono and drummer Emre Ramazanoglu slam down on the gas pedal right from go, and never let up.  But it’s not a race, and this quartet doesn’t move in a straight line.  Melodies work all the angles, and aren’t afraid to circle back and traverse old territory.  The rhythmic approach has the same attitude, where kicking up some dust while sprinting isn’t an excuse not to explore all of the nuance and contours of the landscape.  Cool music out of London.

Teri Parker – In the Past (Self-Produced)

The latest from Teri Parker is a nice laid-back piano session, especially when held in comparison to the wild creativity of her Parker Abbott trio project.  The swaying ballad “On the Farm” and the bop-and-skip of “Oy, Regy!” pull up from the roots of jazz, while the moody “Majnoun” and the sunny “Summer City” branch out into modern territory.  But all these tracks, regardless of the era they belong to, stick to a demeanor well suited to lazy Sunday afternoons when a peacefulness abides and a spark of life can resonate like mad.  Parker is joined by saxophonist Allison Au, bassist Mark Godfrey and drummer Mack Longpre.  Music from Toronto.

The new album from Chris Speed is a Möbius strip.  It twists and turns over and over and over again, but its lyricism is a flat, smooth surface and displays a fluency as seamless as anything could be at these speeds and this level of intensity.  The saxophonist is joined by bassist Chris Tordini and drummer Dave King, and none of ’em hold anything back.  They each carry on the same conversation, each in their own way, and so it’s remarkable that the music is as cohesive and fluid as it is.  Yes, the raised heat of “Crooked Teeth” burns away the edges of the tune’s structure, and the brief pauses of silence on “Red Hook Nights” add tiny speed bumps to this album’s appealing forward momentum, but all in all, the trio found, and stayed in, that sweet spot where motion and melody exist in perfect harmony.

Native Speaker has a peaceful ambiance that’s got a certain charm.  But the real draw is when Stefanos Tsourelis switches over from guitar to oud.  Oud isn’t a typical instrument in the jazz setting, especially in a relatively straight-ahead session, and so it’s pretty illuminating to hear it drive this trio session.  Curiosity aside, though, there’s plenty here to like.  Bassist Dave Jones and drummer Eric Ford round out the trio.  Music from London.

Compelling sense of drama and intensity on this set from drummer Peter Ivshin.  Three extended pieces build up from a whisper of melody to a monsoon of harmony.  The give-and-take between song structure and wild improvisation adds a welcome dose of tension.  Pianist Dmitry Ilugdin, bassist Igor Ivanushkin and saxophonist Alexey Kruglov round out Ivshin’s quartet.  Some enjoyable music from Moscow.