And here’s Part II of this week’s recommendations.  A couple things worth noting:  One, both co-Albums of the Week were released by Songlines Recordings.  It’s a label that has put out some excellent music, but they especially seem to be on a roll lately.  Also, guitarist Tony Wilson has notched Album of the Week two weeks in a row- this week as part of the Waxwing trio and last week with his 6tet recording A Day’s Life.  That’s a hell of an accomplishment.

Today’s batch of recommendations seems either to be a traditional jazz fastball right over the heart of the plate or inventive music that might not even be playing the sport of Jazz.  All of it is seriously good stuff. 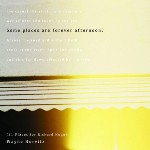 The thing about pianist & composer Wayne Horvitz is that even though he has his hands in any number of creatively diverse projects, his particular sound is remarkably singular and distinguishable.  It’s as good a reason as any to explain the admirable synthesis that occurs when he brings his Gravitas Quartet and Sweeter Than The Day ensembles together on his newest album.  Cornetist Ron Miles, bassoonist Sara Schoenbeck, cellist Peggy Lee, guitarist Tim Young, bassist Keith Lowe and drummer Eric Eagle join the piano & keyboards & electronics of Horvitz for a masterpiece of Horvitz’s unique expression of cinematic jazz-chamber-folk… highly lyrical, deeply melodic music that inspires imagery of full-moon nights over dark alleys, warm beams of sunlight cast through the gaping holes of abandoned industrial complexes, and a curious tranquility that radiates a reverential tone and an ambiance tailored for paradise.

We’re about a month away from a series of Wayne Horvitz columns.  Get a head start and pick up this album right now.

Download a free album track at the Songlines site.

A real vibrancy to the new one from pianist Gardony, who adds three saxophonists to round out a sextet on this live performance.  The heart of hard bop throughout, with a huge warmth, a big sound, and plenty of bluesy grooves and soulful reveries.  I’m pretty well addicted to this recording, and it’ll definitely put a smile on the faces of old-school fans who feel disconnected from the modern jazz scene.

Really enjoyable set from Dave & Judith O’Higgins’ big band, putting a nice touch on Jorg Achim Keller’s arrangements of the great Oliver Nelson recording Blues & the Abstract Truth.  Music that sounds like it comes from the era of its source material and full of the life of today.  Reminded of just how evocative the song “Stolen Moments” is as an opening track, and just how strong it resonates for the length of a recording.

After hearing the massive sounds emanating from pianist Fujii’s latest, it’s difficult to believe that her Tobira consists of just four musicians.  Fujii, bassist Todd Nicholson, drummer/percussionist Takashi Itani and trumpeter Natsuki Tamura create music as a force of will, possessing a nature that is fickle and inclined to change without warning.  From the dissonance, some wonderful moments of quiet, alluring harmony.

Strangely compelling debut from pianist Erika Doh and flautist Gina Izzo.  They capture the spirit of the late-60s, when jazz was entering an out period, and compositional seeds and improvisational waves were less inclined to produce form than they were presence.  Trumpeter Ambrose Akinmusire is both a guest musician on the recording and a contributor of a composition, along with Vijay Iyer, Pascal Le Boeuf, Christian Carey and others.

There’s nothing straight-forward about this avant-garde trio set from pianist Kowalkowski, bassist Harrison Bankhead and drummer Avreeayl Ra, and yet patterns emerge that create not only a sense of expectation but are also positively mesmerizing.  That said, the music’s stop-and-go motion, its clashes and collisions, and its sudden scene changes are far more likely to keep the ear riveted than send the mind drifting deep into thought.  Powerful, driving music that doesn’t try to bully the listener into submission.

Plenty of thick grooves to carry whimsical melodies along in their embrace on this quartet session consisting of one drummer and three musicians working a small armory of brass and woodwind instruments.  Fat sounds that allow pauses and respites to breathe and gain strength without weakening the flow of the cadence.  Fun music and more than a little catchy.