Iiro Rantala – My History In Jazz 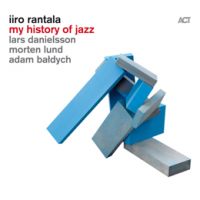 The title on this recording isn’t coincidental.  Iiro Rantala is expressing his own personal relationship with Jazz, and like any other relationship in life, it involves elements that don’t necessarily fall under the Jazz umbrella.  That’s why classical compositions by Bach and pop standards like “September Song” are presented along with original pieces and renditions of songs like “Caravan.”

Rantala’s sound doesn’t sacrifice its typical austere grace as it switches up the source material, but there’s a noticeable shift in the overall sound from track to track, duly reflecting the disparate influences on his history in jazz.  Rantala’s takes on Bach’s “Goldberg Variation” possess a distant warmth, whereas the group’s rendition of “Caravan” echoes the original’s boisterousness.  “Eronel” has a friendly piano trio hop and bounce that would fit right into the jazz scene of the sixties, whereas the casual propulsion and lovely melodic drift of “Smoothie” is an outstanding example of how jazz musicians of the new century are putting their stamp on the artform.

Violinist Baldych guests on four of the tracks.  It’s nice to see him getting put to use since signing with the ACT Music label.  He’s a hell of a talent, and fits in just fine with the established pros that comprise the core trio.

Released on the ACT Music label.

An album with an ethereal presence.  Francesco Cataldo brings a variety of guitars to the table, not to mention a line-up of modern jazz all-stars.  Peaceful music that stays that way, even during those times when the tempo picks up.  Much respect for Binney, who has a distinctive big sound, but finds a way to really fit in well with the predominant serenity of this recording.

Released on the Alfa Music label.  Available at eMusic.

Saxophonist Alban Darche‘s trio plays quirky music that sometimes slides into soothing melodic intervals.  Music that uses odd meters to stir up a playful bounce, but when they kick back with a casual swagger, like on the nifty “Cafe du Change,” they shine brightest.  Probably a good choice if you’re just getting into Jazz, and are into rock bands like Morphine.  Very likable.

Released on the Yolk Records label.  Available at eMusic.

Guitarist Timucin Sahin leads a hyperactive quintet date.  Lots of voices speaking at once and over one another.  Even those times when the tempo decreases, there persists a sense of moving fast.  Jazz as car chase movie scene.  The fingerprints of Alessi’s trumpet stylings are all over this album.

Released on the Between The Lines Records label.  Available at eMusic.

Jason Marsalis – A World of Mallets

On this nifty recording, in addition to vibes, Jason Marsalis employs a variety of percussion instruments and generates an expanse of sound that ranges from foot-tappingly snappy to exquisitely melodic.  Nothing straight-ahead about this recording, though intriguingly, it interacts with the listener much in that way.  Thus, an album that’s both engaging and highly listenable.  Don’t be surprised if I have more to say about this album before year-end.

Released on the Basin Street Records label.  Available at eMusic.

Trumpeter Brad Goode definitely has his own singular voice on his instrument, and it’s been neat hearing him develop it over time.  He never seems to stop searching for the right equation to fully blossom.  On this recording, he mixes some modern nu-jazz with some traditional music forms, and then rounds out his sextet with a guitarist who doubles on sitar and fills another seat with rik & darbouka.  The album is a bit uneven, though tracks like “St. Louis Blues” and “Chicago Red” serve as evidence of Goode’s talent for making experimentalism sound very cool, and why his music should be heard and followed.

Released on the Origin Arts label.  Available at eMusic.

The Iiro Rantala review is original to Bird is the Worm, but portions of the other reviews were originally used in my Jazz Picks weekly article for eMusic, so here’s some language protecting their rights to that reprinted material as the one to hire me to write about new jazz arrivals to their site…

My new Jazz Picks are up at eMusic Work Space: A Bird is the Worm Tumblr site