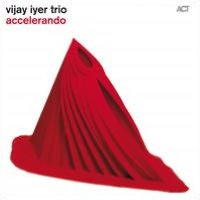 Both in words and music, pianist Vijay Iyer has repeatedly expressed his desire to focus on the rhythmic aspect of music (his own and the music of others), and how he reacts to it viscerally in the way it feeds the impulse for motion… to dance.

But when I think about danceable music, the complex rhythm palette Iyer dips his brush into isn’t something that springs to mind.  But Iyer doesn’t view that gap as an obstacle, in fact, appears to view it as his challenge to form the bridge between the intricate and the accessible.  It’s a sort of middle ground between a facelift approach of playing what the masses prefer to hear and the guerrilla tactics of the Avant-Pop artist.  And Bridging The Gap may be the trickiest of the three routes to take, with the inherent danger being that the music jells in a way to render it neither complex nor accessible, each of the various qualities cancelling one another out, and leaving a muddied puddle of good intentions and all groups of listeners dissatisfied.

Accelerando ain’t an album that’s gonna light up any dance halls, but there’s no denying its thoughtful expressions of rhythm.  And looking back over this review, I find myself utilizing words and phrases that allude to rhythm given shape and form… motion, action, groove, and the language of dance.  For Iyer, this may be evidence of success.  For me, someone who typically prefers a solid melody more than a solid rhythm, it left me feeling like the music had engaged me in a way that was on its own terms, yet found a way to interface as if they were my own.  Pretty neat.

The album opens with “Bode,” a short brooding section of sparse piano notes, wavering arco, and cymbal work.  It is the music played as the curtain rises on the album.  It doesn’t give a taste of what’s to come, but it does set the table nicely for “Optimism,” which retains much of the simmering tension of the opener, but starts out by juxtaposing it against a light step and sprightly rhythms, sort of a Vince Guaraldi Peanuts dance by jaded kids on a cloudy day.  But the pace picks up, as does the intensity.  There is an ebb and flow to the tempo and volume, the trio playing a game of tug of war with only itself.

“The Star of a Story” has a genial sweep and twirl, even as the rhythm section digs in its heels and establishes a thick steady beat more akin to head bopping.  It’s an aspect of Iyer’s music, especially on this album, that I really appreciate… his talent at corralling riptides of percussion so that they don’t pull the melodies out to sea.

Interesting take on Michael Jackson’s “Human Nature.”  Beautiful expression of melody, and the trio seem to embrace the original with genuine regard.  And then Iyer begins tinkering, and tinkering becomes deconstructing, and the gap between rendition and original grows increasingly wider.  Personally, I enjoy when jazz artists deconstruct pop tunes… it opens up all kinds of panoramas and vistas not necessarily evident in the pop version.  But sometimes the deconstruction can be a bit much, especially if the rendition begins with an honest nod to the original (as the trio does here).  Just when I found myself thinking, “okay, this has gone on long enough,” the floor drops out and the trio suddenly returns to the melody all light and sweet, and that’s the moment when I began falling for this album.  Iyer ends with a reprise of sorts, giving the impression that the song is over just to start it back up with a grand finale.  A bit of arco is thrown in to nice effect, and the emotional shift for that reprise really wraps it up nicely, in that satisfying way that the right encore played the right way can send concertgoers to the doors with the best feeling.

“Mmmhmm” is a good example of where I sometimes get a little put off with Iyer’s fussiness.  The tune begins with an icy glide, a gentle buffeting surge coaxed out with some heartbreaking arco by Crump and an insistent but unpushy chatter by Gilmore.  Meanwhile, Iyer skates circles around the rhythm while simultaneously creating some of his own.  Having found such a lovely groove from the outset, I can’t help but want the song to just keep it going like that.  But Iyer begins digging up phrases and scattering notes in ways that make a bit of a mess of things, and making me wish he’d leave well enough alone.  But it’s difficult for me to find fault with him for this tendency, because, one, I understand the creative impulse that drives an artist to keep exploring, and two, he displays such a talent for shepherding a tune back into the fold just as the barn door closes, that it feels a bit hypocritical for me to take so much enjoyment from that while criticizing him for the very action that allowed it happen in the first place.  But there you go.

Each of the trio members had earned their bona fides going into this session, but if anyone needs proof of their virtuosity, take a listen to their version of Henry Threadgill’s “Little Pocket Size Demons”… it’s the sound three simultaneous rainstorms in a torrential throw-down of who can best batter the earth.

The title track is deserving of mention.  The trio plays with cadence, overlaying a staggered rhythm atop a surging tune that seems more inclined to headbanging than bopping.  The effect is two circles of percussion, one inside the other and moving in opposite directions, perpetually teasing the ear to follow one and not the other.

“Lude” presents itself as fundamentally solid and a pleasant listen, but nothing that’s going to stand out from the crowd.  But the trio pulls a nifty trick, ending the song with a pared down groove that was only hinted at in the opening stanza.  Iyer yanks the tablecloth out from under the dishes and shows that, all along, this was just a funky little tune.  Cleverness in art is trite and tedious, except when it’s done well, and then it draws a smile and engenders appreciation.  Iyer earns his smile with this track.

“Actions Speak” sounds like an Americanized version of a Nik Bartsch’s Ronin composition.  Driving tempos and melodic riffs and melodramatic flairs, but Iyer sounds far more grounded, whereas Bartsch often is all about flowing rivers.

The album ends with “Village of the Virgins.”  It has an unhurried gait.  It takes time to express itself clearly without dawdling.  It has that anticipatory sense of finality, an effusive presence of gather-together-for-this-is-the-end.  Albums need to know how to go out on the right note.  If you’re ending your album with the weakest track from the session, you’re doing it wrong.  Iyer ends Accelerando with a masterful touch.

Released on the ACT Music label.

Klabbes Bank – “Dalarna” My new Jazz Picks are up at eMusic