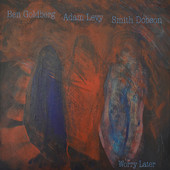 This isn’t the first time clarinetist Ben Goldberg has embraced the Thelonious Monk songbook.  A 2007 release, Plays Monk, in a trio with bassist Devin Hoff and drummer Scott Amendola really highlighted the quirks and eccentricities of Monk’s singular approach, and, also, it was just plain fun hearing a piano-less album of Monk’s music.  For Worry Later, his newest Monk project, Goldberg is joined by guitarist Adam Levy and drummer Smith Dobson… still piano-less and still very fun.  Intriguingly, whereas the previous recording sounded thick in the middle of Monk’s compositions, the newest seems to focus on their individual characteristic.  This approach has the effect of opening the compositions up and spreading them out… a sonic transparency that is quite striking.

In particular, on “Hornin In” and “Trinkle Tinkle,” when the trio accentuates the rhythmic qualities of the music, the motion can become almost beguiling, even taking into consideration the odd trajectories.  For other tunes, like “Little Rootie Tootie” and “Light Blue,” the trio adopts a relaxed lazy-afternoon ambiance that is beguiling in its own right… just different.  For “Brilliant Corners” and “Criss Cross,” the melody is laid down on the table, then dissected into smaller, interesting fragments, which in turn, become fodder for some harmonic playfulness.

Goldberg is one of the more inventive musicians on the scene, and there isn’t a project he works on that doesn’t offer up something new and insightful.