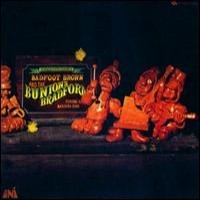 Bill Cosby put out an all-instrumental soul/funk/jazz album back in 1971 entitled Bill Cosby Presents Badfoot Brown & The Bunions Bradford Funeral & Marching Band.  It remained on vinyl and impossible to find until Dusty Groove reissued it on CD on their own label a handful of years ago.  I discovered it myself quite by chance, just wandering the internet, and something led me to the nifty Soul-sides site that focused on obscure funk and soul.  They streamed an album track, and I was hooked.  It wasn’t long after that I ordered a new copy from Dusty Groove all for my own.  When I realized that I hadn’t made any mention of it on my site, I immediately set to typing the entry you’re now reading.

The only mention in the liner notes regarding the session personnel is that, perhaps, keyboardist Stu Gardner played a role in the making of this album.  Other than that, it’s rumored to consist mostly of well known L.A. jazz studio musicians, many of whom wanted to keep their name out of it due to contract problems.  Bill Cosby performs on keyboards, allegedly, and AllMusic’s Thom Jurek reports that Big Black and Bobby Hayes may have performed on this album.  There is a second recording, released a year later under a nearly identical title (blue album cover and no ampersands in the title), and Big Black does perform on that session (as does Joe Henderson, Walter Bishop Jr., and guitarist Jimmy Smith).

In their little blurb on the CD, Dusty Groove describes the music as a messed-up jam session that turned into a mind-blowing album.  Not a bad description.  It’s got two songs.  The first, “Martin’s Funeral,” begins with a haunting opening that builds and crashes with intensity a couple times during its fifteen minutes.  The other song “Hybish Shybish” is a fun bit of improvisational jamming on a groove bursting with psychedelia and funk.

Tribe Called Quest sampled Martin’s Funeral, which originally stoked renewed interest in the album and got people to searching for it.  The album’s unavailability as an out-of-print vinyl-only release bumped up the feverish pursuit of the recording.  Dusty Groove finally put many people, especially those completely disinterested in slogging through bins of old vinyl, out of their misery by issuing it on CD.

The album is terrifically fun and engaging, and well worth scooping up, and comes highly recommended from this guy.

Released on the Dusty Groove label.

There doesn’t appear to be many retail links.  There are a couple Amazon Re-Sellers.

Unfortunately, it appears that Dusty Groove has sold out of their supply of the album. Feel free to contact them to see if they have one stashed away in box somewhere.  Hell, maybe some renewed interest would get them to cook up a new batch.  And if you’re not familiar with their site, spend some time rummaging through it… their online store and their Chicago storefront are both top-notch. 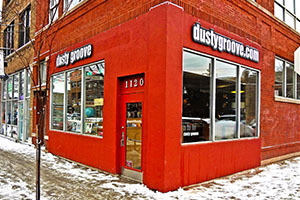 And, yes, that’s what a typically gloomy Chicago winter day looks like in the city.  The nice thing about shopping the Dusty Groove store online… no leftover snow.