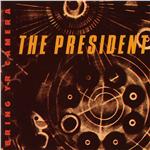 Today’s free Wayne Horvitz track comes from his 1988 release Bring Yr Camera, featuring his ensemble The President.  This was one of my early introductions to Horvitz.  My first was another of his The President recordings, the 1992 release Miracle Mile.  And like that one, Bring Yr Camera had Horvitz really accentuating the ambling electronic style that is gradually subsumed by his strange folk-jazz-classical constructions on later recordings.

Bring Yr Camera doesn’t rank very high for me as far as favorite Horvitz recordings, but I tend to look favorably upon the recordings that introduced me to a particular musician, regardless of how I think they stack up against other recordings discovered later.  And besides, I’ve found it interesting to hear the seeds of early recordings that manifest with more substantive effect down the road.  Comparable to later recordings is Horvitz’s talent for allowing beautiful melodies to emerge in abrasive environments.  For me personally, that dichotomy always fed divergent aspects of my personality.  There was the part of me that kept demanding, “Yes, more noise!”  And there was that part of me that just wanted to hear something pretty.  These President recordings always found a way to satisfy both of those needs.  Today’s free track, “Philip,” definitely did, as did the album’s opening track, “Hearts Are Broken.”

The track “Wish the Children Would Come On Home” closes the album out.  It’s also the title of the Horvitz songbook tribute album by The Westerlies, an album which has received several recommendations on this site.  Of interest perhaps to no one, my favorite track on Bring Yr Camera is “Our Hands of Water.”  There are times that Horvitz is able to generate the most introspective moods and it creates a palpable serenity that I find absolutely arresting.  It’s one of those too rare instances when I am able to completely submerge myself in a song.

There are several Horvitz tracks over the course of his discography that have accomplished that for me.  Bobby Previte, who plays drums on this recording, does something similar on his curious 1988 release Claude’s Late Morning.  This album has a similar sound to Horvitz’s The President recordings, which isn’t terribly surprising considering their collaborative efforts… including Claude’s…, which Horvitz contributes to on organ (and also has contributions from Bill Frisell and Carol Emanuel among others).  But a tune like “First Song for Kate” totally reflects that potent contemplative ambiance Horvitz is able to cast.

Anyways, here’s today’s free track.  You can download from the player or go to the Bandcamp site and take care of business there. An additional bonus of downloading from the Bandcamp site is that Horvitz writes little anecdotes for each of the tracks.

Released originally in 1988 on the Elektra label, then, later, digitally on Nonesuch Records.

Explore more of Horvitz’s music on his Bandcamp page.

And be sure to read more about the music of Wayne Horvitz on this site.