These are songs that I like: Bill Lee’s “John Coltrane” 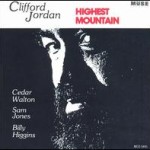 Like most of the music I discover, I came upon Clifford Jordan‘s Highest Mountain through sheer perseverance.  Sometime in the mid- to late-90s, I was rifling through the CDs at Jerry’s Record Exchange in Denver and came across Jordan’s 1975 Muse label release.  I can’t recall if that was my introduction to Jordan’s music.  I may have been familiar with him previously via a Mingus recording or perhaps the Blue Note recording he made with John Gilmore.  I think it’s just as likely that I simply recognized drummer Billy Higgins name on the cover (a musician I was very familiar with by that point), and pulled it out of the stacks based on that.  But whatever the trigger, it’s been one of the happier music choices I’ve made.  That particular recording, along with most of Jordan’s 1970s output, remains some of my favorite work.  In particular, the album’s opening track, the Bill Lee composition “John Coltrane.”

I think it’s the perfect tribute to Coltrane, retaining that quality most important in a tribute song… the artist must but true to their own voice and not parrot the inspiration.  This is a Bill Lee-Clifford Jordan song.  Excepting perhaps the title-track “Highest Mountain,” it represents so much of Jordan’s output in the 1970s… creatively fertile years for the artist.  It possesses that particular noirish hard bop of Jordan’s, blending in some spiritual jazz for good measure.  Jordan’s music is one of controlled force.  He had a talent for expressing ferocity in the most delicate way.

So did John Coltrane.  The brooding intensity of “Africa,” the soulful menace of “Greensleeves,” the moody transcendence of “India”… just a small sample of Coltrane’s ability to make smoldering embers burn hotter and brighter than the conflagrations of other saxophonists.  But perhaps the best example is the terrifically affecting introduction to A Love Supreme.  That crash of gong, the saxophone cry, the murmur of piano… “Part I: Acknowledgement” opens with a lyricism that announces “I have a story to tell,” and is so riveting as to lock the ear in for the duration.  That same effect results from the opening to the song “John Coltrane.”  Walton’s haunting phrases on piano, Jones’s loping steps on bass, Higgins’ nervous chatter on drums, and then Jordan’s moving opener on sax… it possesses that same resonance.

The rest of the song is no less moving.  The concerted drive of the quartet creates an ebb and flow to the song’s intensity, and touches upon both the power and fragility of the song’s opening notes as well as the music of Coltrane himself.  The interlude of chant at the heart of the song, and then the thrilling way it leaps off a cliff and just takes off soaring… Jordan’s sax headed straight for the sun as Walton’s piano flutters in the torrents of rhythm created by Higgins and Jones.  And then the gradual wind-down to a peaceful finale, losing none of its intensity, growing no less evocative… a great song from beginning to end, and one of my personal favorites.

Jordan originally recorded the song a couple years earlier, on the excellent Glass Bead Games, featuring a slightly different line-up with Stanley Cowell on piano and composer Bill Lee on bass.  This version is still quite strong, but not nearly as evocative as the live performance recorded on Highest Mountain.

And it appears that Highest Mountain wasn’t even the original title on Muse.  It looks like the original vinyl issue was called Night of the Mark VII, and that it was only called Highest Mountain on the Muse CD issue (which is how I first discovered it; album cover image above).  Later, when Joel Dorn began reissuing Muse under his own 32Jazz label, he returned this live performance to its original name of Night of the Mark VII.  Just saying…

In any event, I wanted to highlight some other renditions of the Bill Lee composition.  Here they are:

Billy Higgins, the drummer on the original sessions, also recorded a version of the song on his solo effort, the 1984 recording Mr. Billy Higgins.  A quartet session that features saxophonist Gary Bias, pianist William Henderson, and bassist Tony Dumas, they apply an elegant touch to the song.  In particular, Bias’s saxophone accentuates the cinematic ambiance of Jordan’s sound on the original, articulating the undeniable lyricism of the saxophone section, illustrating how a show of force isn’t required to gain an evocative punch out of the Bill Lee composition.

Bassist Dumas is superb on this rendition, matching the supreme resonance of Sam Jones’s bass contribution on the original, while adding some mesmerizing bass arco to pair beautifully with Bias’s fluttering saxophone opening.  Higgins’ perpetual chatter on drums instills the song with an undercurrent of tension that typifies the original, and balanced against Henderson’s gentle raindrops on piano, it’s a rhythmic shadowplay of light and dark.

Best of all, the Higgins rendition honors the Jordan/Lee original while simultaneously expressing Higgins’ own singular vision of the song.

Two recent renditions are from frequent collaborators, saxophonist Nat Birchall and trumpeter Matthew Halsall.  When asked for recommendations of someone on the jazz scene today that would appeal to a fan of John Coltrane, especially his later-period spiritual jazz sound, Birchall is typically one of the first names I drop.  His use of controlled force on sax, of sometimes emitting heat from within the hearth and sometimes simply throwing flames in all directions, it’s the kind of quality that is going to appeal to fans of Coltrane.  Also, Birchall’s music is simply some excellent saxophone jazz.

Speaking of that music, Nat Birchall is releasing a new album this month, Live in Larissa, which features a rendition of the song “John Coltrane.”  From a 2013 live performance, in addition to Birchall’s saxophones, the album features pianist Adam Fairhall, vibraphonist Corey Mwamba, bassist Nick Blacka, and drummer Paul Hession.

Birchall’s quintet bypasses the noirish quality of Jordan’s original, and explores the song’s inherent potency.  And, actually, they do more than explore that potency… they release it and let it run wild.

Of immediate interest is the inspired decision to add vibes to the mix.  Mwamba’s contribution nicely mirrors the icy, yet distant warmth of Cedar Walton’s part on the Clifford Jordan original.  This, partnered with Fairhall’s own piano section adds some dynamic texture to the song, a percussive strata that doubles down on the emotional punch.  And when taken in the context of Birchall’s fiery, searching voicing on sax, it’s a rendition that brings all kinds of intensity.

It’s a different kind of intensity delivered by frequent Birchall collaborator, trumpeter Matthew Halsall.  Halsall’s patient, almost drifting sound on trumpet recalls the Miles Davis modal period to a tee, and his recent expansion in a modern spiritual jazz sound is a logical expansion of that creative voice.  Originally recorded at the BBC Maida Vale Sessions on BBC Radio 1 in early 2010, Halsall gave his own version of “John Coltrane.”  Of immediate interest is the comparison of how saxophonist Nat Birchall’s contribution to the Halsall ensemble rendition is one that is more like a focused beam of sonic intensity versus his Live in Larissa rendition, which allows for plenty of lateral exploration of the composition.

What I like about the Halsall rendition is that he brings his late-night cool jazz atmosphere to the track, and rather than neuter the original’s intensity, Halsall opts to refocus it with a casual charm that substitutes a floating ambiance for the original’s soaring charge.  The rewards of this approach become increasingly clear as the song transitions from Birchall’s fiery opening to Halsall’s languorous trumpet section.  Even pianist Fairhall, who also performs on the Birchall Live in Larissa session, takes a different tack, adopting Halsall’s drifting presence as his own.  The rhythm section of bassist Gavin Barras and drummer Gaz Hughes forgo both Birchall’s and the Jordan original’s deep resonance and nervous chatter for one that chooses to accentuate the lyricism of the Halsall rendition.

It’s yet one more different perspective of the Bill Lee composition.

And then there’s this version I recently discovered by the Kindred Spirits Ensemble.  The Amsterdam-based KSE, originally formed in 2006 by KC The Funkaholic, Han Litz and Wiboud Burkens to celebrate John Coltrane’s 80th birthday anniversary, takes a modern spiritual jazz approach to the song, more along the lines of Tru Thoughts artists like Menagerie and Mark de Clive-Lowe.

This large ensemble presents the melody with a light and lovely touch, echoing a bit of the past while the hitting the notes of the present, adding some spoken word that could belong to either era.

And there would be no other appropriate way to end this article than by highlighting a rendition of the song by the man himself, the song’s composer, Bill Lee and his Natural Spiritual Orchestra performing his song “John Coltrane.”

Filmed live, back in July 2010, for Bill Lee’s 82nd Big Band Birthday Bash at Nuyorican Poets Cafe, Lee’s ensemble perfectly incorporates all the euphoric spirituality of the original, as well as its burgeoning intensity.  And ending with a Happy Birthday coda is a nice touch.  Just outstanding.

And here some retail links to the above recordings (where available):

There’s no Natural Spiritual Orchestra recording of “John Coltrane,” but here’s a couple links to other music by the ensemble:  eMusic | Amazon